Legend had fairies, it had Tim Curry, it had Tom Cruise before he got his teeth fixed and most importantly it had unicorns! I remember getting all emotional the first time I watched it because the evil demon was being cruel to the unicorns (some of these 80’s films were a lot darker than the fluffy Disney and pixar stuff you have today). 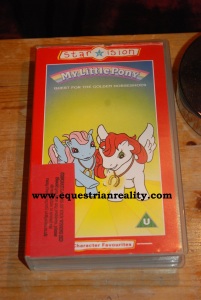 What 80’s/90’s kid didn’t own at least one My Little Pony? One Christmas I got dream castle – it was amazing! Majesty even had horseshoes. A part of me died inside when my mum gave it to my younger cousin having deemed it as outgrown. Aside from My Little Pony the movie (which you can read all about here), there were a number of different VHS tapes available with different pony adventures and also an odd VHS which had a number of cartoons on with My Little Pony such as the Moon Dreamers.

I may have been a little bit obsessed with Rainbow Brite as a kid. I may also still have a Rainbow Brite costume which I have worn several times. It ended up on tv the last time I wore it, true story. Sadly I can’t find my Rainbow Brite the movie (Rainbow Brite and the Star Stealer) VHS to show you but it is definitely knocking around at Equestrian Reality HQ somewhere. For those of you with fuzzy memories, Rainbow Brite the movie involved Rainbow Brite and Starlight going off on an adventure that involved ending an endless winter and meeting a young lad with a computerised horse. Here is a snippet to refresh your memory: https://www.youtube.com/watch?v=Y65K5Ej8eOc

Directed by Jim Henson, featuring David Bowie at his absolute best and a young doe eyed Jennifer Connolly, Labyrinth was one of the best movies the 80’s had to offer. Judging by the amount of merchandise still sold today it is not just 80’s kids who still enjoy it. Old Skool Christmas was never complete without watching this at least once. 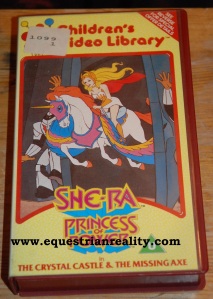 One of my absolute 80’s heroes was She-ra. She had a sword, she had long swishy blonde hair, awesome clothes and a horse that could fly. The movie, the Secret of the Sword which featured He –Man (my brothers hero) and She-ra kept us entertained for hours. The Secret of The Sword was a Christmas full length feature the combined the best of both worlds and also cleared up that despite speculation among kids at the time, He-Man and She-ra were unlikely to become a couple because it turned out they were brother and sister – awkward!

There are also a number of other She-ra VHS tapes I’ve managed to get my hands on with various episodes on them.

Another Jim Henson film, this one was released earlier than Labyrinth and it was a lot darker. I can’t completely remember the full story but the plot revolved around puppet creatures called gelflings who looked like half rats who were trying to find a part of a magical crystal. I’ll be honest, as a child, this scared the living crap out of me.

This was another 80’s animation and was about the last unicorn left heading off on an adventure to find and conquer the red bull who was responsible for the vanishing of the other unicorns. This film was brilliantly done and I still love it.

Given that I think its possibly one of the best films of all time I was horrified recently to learn that a friend had never seen it?! How on earth can anyone not know what ‘do the truffle shuffle’ means?! The goonies was the ultimate 80’s adventure movie as a group of kids encountered a gang of criminals and ended up on a treasure hunt under underground searching for the ship of pirate one eyed willie. I am not going to say any more than that – if you haven’t seen this before – sort yourself out!!